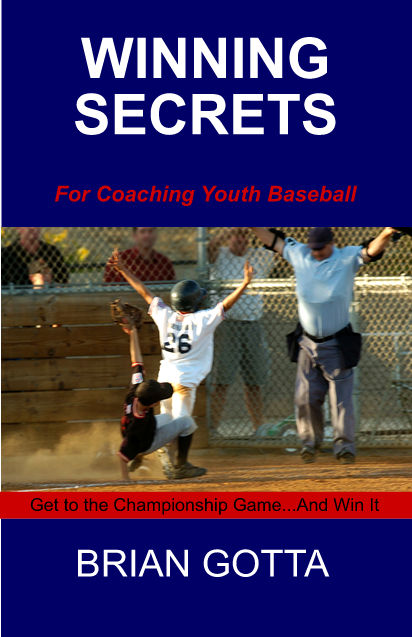 Winning Secrets Written by Brian Gotta, Founder and President of CoachDeck. In addition to seven years as a full-time professional coach for players ages 8-15, Brian has coached over 50 teams in Little League, travel ball and all-stars, winning championships at every level. The experience he's accumulated coaching thousands of youth baseball games is available to you in Winning Secrets. (Paperback 282 pages) $24.95

The Unbelievable Point Guard. "Driftin" Clifton Connors is the starting point guard on the Baker Middle School Titans' basketball team. When Clifton's grades suffer, Coach Watson, who is also his Algebra teacher, takes serious action to get him back on track. But Clifton's attempts to hide the truth from his mother backfire and threaten to jeopardize his entire season. Will a new friend he never dreamed he'd have and a star player from the past be able to help Clifton wiggle out of the jam and lead Baker to the City Championship? $9.95

Time for Willy. Life used to be so much easier for Sam Burnett. That was before his dad signed him up to play for the Dragons, a competitive soccer team with the world's meanest coach. Now Sam plays on two teams, and between soccer and schoolwork, he rarely has time to surf or just play with his dog, Willy. When one dramatic week turns Sam's world upside-down, his whole family learns to look at what's important in a new way. (Paperback 112 pages) $9.95

Hanging in There. The only thing Ted Logan loves more than baseball is his big brother, Gary. But while Gary is a baseball superstar, Ted still hasn't ever been quite good enough to make his first team. After his brother leaves home for college, Ted is on the verge of giving up his dream of playing ball forever. Then he stumbles upon a baseball card with a powerful message. With help from a new best friend, what he does next changes his life, and in the process teaches Gary a lesson he'll never forget. (Paperback 133 pages) $9.95 - CURRENTLY OUT OF STOCK

The Season's Not Over. Eddie Thompson, the Coyotes starting pitcher, has always been a team player. But this season the Oakdale City League is awarding the Golden Arm Trophy to the league's top pitcher. And it looks like the Coyotes' other pitcher, Chase Collins, wants to win it-at Eddie's expense! When Eddie discovers a secret that may help the Coyotes win the Championship, but could also hand the trophy to Chase, he faces the toughest decision of his life. (Paperback 133 pages) $9.95